I have been working at open office environment for past 1 and a half years. The first office was a semi open one where workspaces had some degree of separation, not exactly a cubicle, honey comb like structure where there is circle of 4 people at center, and 6 or so people around. The one thing I liked about our office is that there are no corner offices for managers. Even CEO had to sit with others. Though this is my first job, I can appreciate the egalitarian and practical aspects of this. There was some degree of isolation to do deep work (though I seriously crave for more), while preserving the collaborative aspect of open office.

But after few months we moved to new workspace, things changed to the worse. It was the dreaded Complete open office plan, our building consists of floors with more than 200 people in each, and there is no separation between rows of tables. It is a complete nightmare, taking the good design to extreme and making it completely hard to bear.

This made me think about O of S.O.L.I.D principles of software design, which suggest that a good design should be open for extension and closed for modification.I think this applies allegorically to office layout plan.

Some companies have moved to ditching offices completely, but there are many still not taking such a drastic step. So the principle which I arrive on workplace design, Open for Collaboration and Closed for Disturbance. A good office design should make it accessible for people to collaborate and avoid creating unnecessary old age hierarchy bullshit that came in form of corner office perks. At the same time it should provide the much needed c isolation to get shit done. In general the design should at least have some barrier between people.It wouldn’t hurt to provide some “Deep think rooms” which can function as isolation chambers which can be opposite of meeting rooms.

Many studies are pointing to decreased level of productivity in open office plans. It is common sense that deep work requires some degree of isolation, which completely open spaces hardly provides. Every interruption completely derails the thought process which were happening till then, productivity.

Lets look at some facts,studies,opinions which point out to the decrease in productivity, happiness, and involvement in complete open office:

Based on a analysis of 10,000 programming sessions recorded from 86 programmers using Eclipse and Visual Studio and a survey of 414 programmers (Parnin:10), we found: A programmer takes between 10–15 minutes to start editing code after resuming work from an interruption. When interrupted during an edit of a method, only 10% of times did a programmer resume work in less than a minute. A programmer is likely to get just one uninterrupted 2-hour session in a day We also looked at some of the ways programmers coped with interruption: Most sessions programmers navigated to several locations to rebuild context before resuming an edit. Programmers insert intentional compile errors to force a “roadblock” reminder. A source diff is seen as a last resort way to recover state but can be cumbersome to review

Thus while noise was a problem, the greater noise level didn’t appear to be from all of the collective collaboration buzzing around the open room. The researchers then took their analysis one step further, using regression to calculate how important each dimension was to employees’ overall satisfaction. One of the dimensions most strongly related to overall satisfaction was ease of interaction, despite the fact that it was judged to be no better or worse in open office plans than in private offices. In other words, the desire for more collaboration among employees was shared by all, but those in open office plans may not have found it to be worth all of the stress and distraction from the bombardment of noise.

But the most problematic aspect of the open office may be physical rather than psychological: simple noise. In laboratory settings, noise has been repeatedly tiedto reduced cognitive performance. The psychologist Nick Perham, who studies the effect of sound on how we think, has found that office commotion impairsworkers’ ability to recall information, and even to do basic arithmetic. Listening to music to block out the office intrusion doesn’t help: even that, Perham found, impairs our mental acuity. Exposure to noise in an office may also take a toll on the health of employees. In a study by the Cornell University psychologists Gary Evans and Dana Johnson, clerical workers who were exposed to open-office noise for three hours had increased levels of epinephrine — a hormone that we often call adrenaline, associated with the so-called fight-or-flight response. What’s more, Evans and Johnson discovered that people in noisy environments made fewer ergonomic adjustments than they would in private, causing increased physical strain. The subjects subsequently attempted to solve fewer puzzles than they had after working in a quiet environment; in other words, they became less motivated and less creative.

They decrease productivity. Contrary to popular belief, open offices don’t increase collaboration or make people more productive. An Exeter University study showed they create a 32 percent drop in “workers’ well-being” and 15 percent reduction in productivity. .They create time-consuming distractions.Office workers lose an average of 86 minutes per day due to distractions associated with open-plan offices. As a result, many employees are “unmotivated, unproductive, and overly stressed,” according to the study funded by Steelcase. They make employees sick.A study at Queensland University of Technology’s Institute of Health and Biomedical Innovation found that working in environments without offices “caus[es] high levels of stress, conflict, high blood pressure, and a high staff turnover.” This comic describes it in a funny way on what is the cost of interruptions on programmers. This can apply to any field that involves some thinking to be done at work. 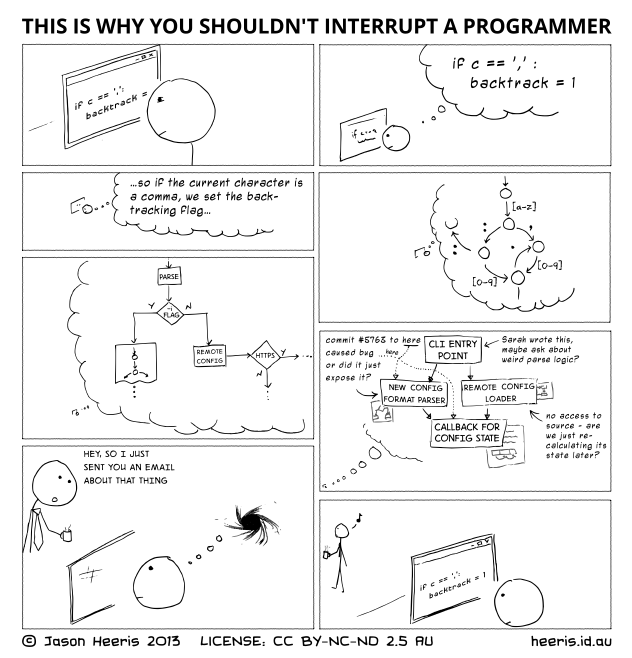